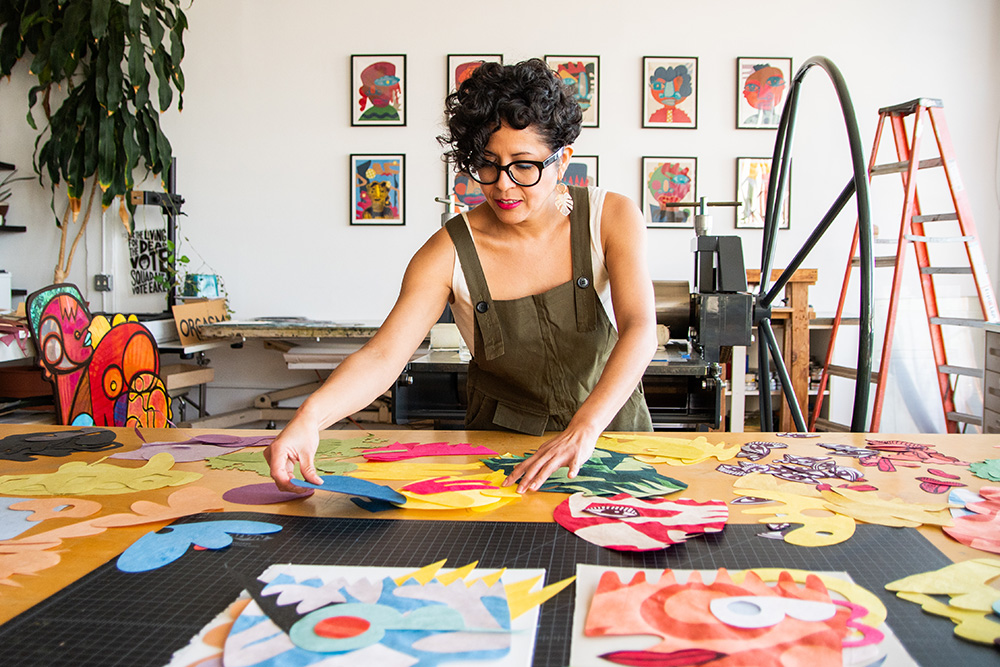 Favianna Rodriguez is an interdisciplinary artist, cultural strategist, and social justice activist based in Oakland, California. Her art and praxis address migration, gender justice, climate change, racial equity, and sexual freedom. Her creative practice boldly challenges entrenched myths and cultural practices, while embodying the YES of a pluralistic future. Favianna's collaborations include Ben & Jerry's Pecan Resist, two large scale public art commissions with the City of San Francisco, and a partnership with Joey Soloway of Topple Productions to create a fellowship for marginalized voices in the entertainment industry. Favianna’s work serves as a record of her human experiences as a woman of color embracing joy and pleasure through personal transformation and psychedelics. Her signature mark-making embodies the perspective of a first-generation American Latinx artist with Afro-Latinx roots who grew up in Oakland, California during the era of the war on drugs and the birth of Hip Hop.

Favianna's practice includes visual art, public art, writing, cultural organizing and power building. She leads meaningful collaborations with social movements that lead to resilient and transformative cultural strategies. In addition to her expansive studio practice, she is the co-founder and president of The Center for Cultural Power, a national organization that empowers artists to disrupt the status quo and ignite change at the intersection of culture and social justice. In 2016, Favianna received the Robert Rauschenberg Artist as Activist Fellowship for her work around immigrant detention and mass incarceration. In 2017, she was awarded an Atlantic Fellowship for Racial Equity for her work around racial justice and climate change. In 2018, she received the SOROS Equality Fellowship for organizing artists activists. An artist entrepreneur, she has co-founded various institutions, including the EastSide Arts Alliance, a cultural center and affordable housing complex in Oakland, CA, and Presente.org, the largest Latino online organizing community in the US. She is currently working on a film about healing from womb trauma.