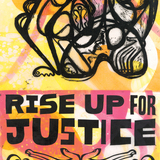 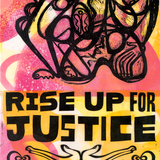 Down with Machismo EV 2/3

On April 14, 2014, hundreds of school girls, most between the ages of 16 and 18, were abducted from the Government Girls Secondary School in north-eastern Nigeria by the Islamist armed group Boko Haram. Reports revealed that the girls were being sold into sexual slavery or forced "marriage.”

I created this piece in response to this incident, and to the worldwide epidemic of human trafficking of women and girls. The exploitation and sexual abuse of women and girls is global problem and it is reported that sex trafficking is the second most lucrative illegal businesses in the world, after drugs. This piece is a call to dismantle patriarchy and machismo, and to stand up for girls and women of the world.

This limited edition is a woodblock printed over a monotype on Japanese paper. The figure was originally drawn with sumi ink. The three figures are connected and unified, working together to end gender violence.