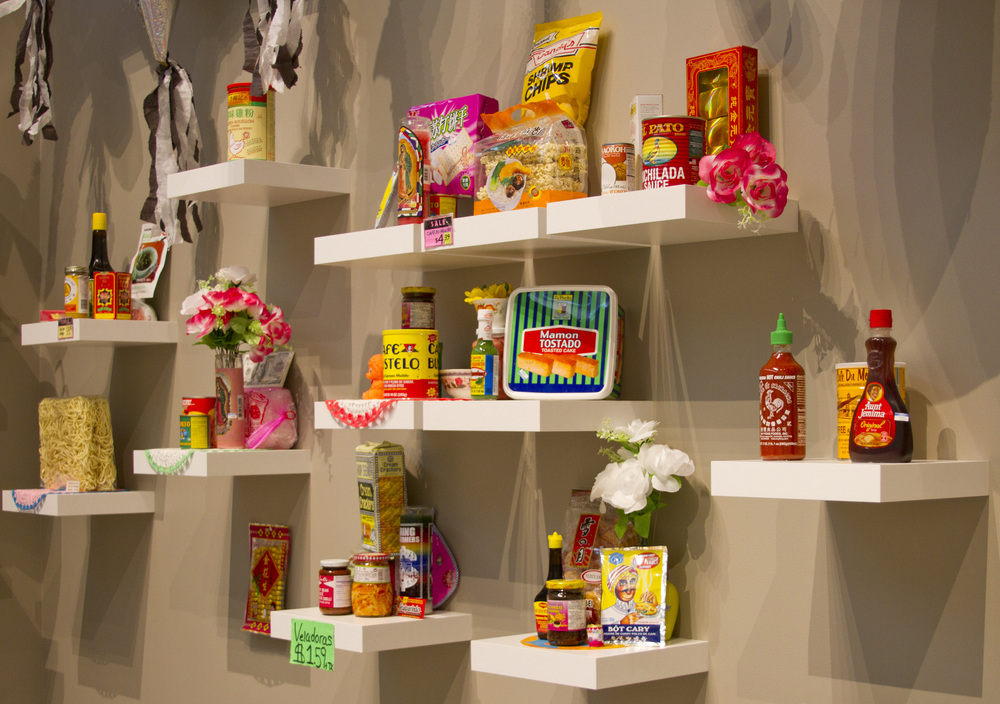 This site-specific installation at the Oakland Museum of California examined the influence of diverse immigrant communities on Oakland’s food and street culture. The objects in the installation include popular food items from the busiest Asian and Latino food markets in the Fruitvale and San Antonio districts, two large immigrant neighborhoods in East Oakland. The piece is a homage to the powerful and emotional role of food and cultural symbols for migrants families who strive to hold fast to their home countries. In my own migrant family, food symbolized a ritual through which we resisted assimilation. I would desire fast food as a child because it represented what it meant to be American. But after years of learning about food justice and environmental racism, I realized the many ways in which the food economy exploits migrant labor, while fast food restaurants dominate in migrant neighborhoods and contribute to diseases like Type II Diabetes.

As a child of immigrants, I believe that our ancestral and traditional diets and cultural traditions serve as a ongoing connections to the places from which our families were displaced. This installation pays homage to the migrant food culture in East Oakland, in particular to the Asian and Latino migrant entrepreneurs who have built local economies around their traditional diets. In selecting the particular foods and objects for this piece, I parsed through the endless array of multicultural budget shopping items that speak more about the economies and counter-economies that take place everyday in Oakland’s immigrant neighborhoods. The installation included a custom map of unique immigrant-owned restaurants and food joints in East Oakland.

This site specific installation was a part of the exhibit, “Who is Oakland?” an exploration of Oakland’s many dimensions through the work of artists who live, work, and love the city of Oakland. In this experimental exhibition, lead artist Chris Johnson and nine Oakland-based artists created vibrant works featuring the celebratory, inspirational, and challenging aspects of political and cultural realities of Oakland. Artists featured in the exhibition were Kim Anno, Jesse Crime, Susan Felter, Jose Garcia, Chris Johnson, John McCoy, Adia Millet, Chris Treggiari, Tommy Wong and myself. The exhibit included videos of Oakland citizens speaking about what it means to be from Oakland.